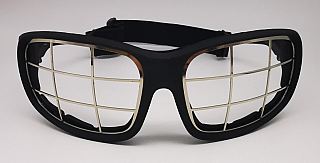 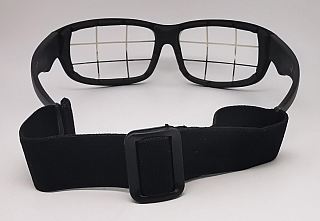 I had been playing floorball for more than ten years when I suddenly was hit in the eye by the ball. It was nothing really bad, but I realized I had been lucky, so the next day I bought a pair of protective eye goggles, with plastic lenses. I wore them the next time I played only to find out that after ten minutes of playing they had fogged up so I couldn't see anything. I wiped the fog away and played on. After another five minutes they were foggy again so I wiped them again, but this time the fog was mixed up with sweat and I couldn't make them clear. I had to put them away. I tried to use them a few more times, but after ten, fifteen minutes of play, I couldn't see anything. Needless to say, I stopped using them. Until the ball hit me in the eye again. I tried the same sequence of putting on the glasses, wiping away the fog and sweat and finally discarding them again. The situation became very frustrating. I wanted so badly to play, but I didin't want to risk getting hit in my eyes again. I realized I had to come up with something to solve the problem, something that didn't involve plastic lenses. I consulted my co-players and we started brainstorming various ideas and soon we arrived at some net or grid replacing the lense. We built a simple prototype using a pair of sunglasses. They looked ok and we knew we were on the right track. We contacted some manufacturers of eyewear and eventually found one that could make a design that we liked. Early on we asked some people at the Karolinska Institute and the number one eye hospital in Stockholm, S:t Eriks Ögonsjukhus, to look at our prototype and comment on it. They made valuable comments about field of view and the design of the grid and the padding. The final step is to get the glasses approved by the swedish testing authority, Statens Provningsanstalt, SP, and get them CE-certified. This has now been done and we have a certified product for floorball ready to be used by players who do not want to risk their eye sight when playing the game we love so much!